This document describes the testing completed on the v1.0.0-alpha tag in the Hyperledger Fabric repo. The document is a work-in-progress and will continue to be enhanced.

The following environment was used for testing:

4 Peers (which include Endorser and Committer roles) and 1 membership services (fabric-ca only) with ordering service running different orchestrations. There are two organizations, each containing two peers.

Note: Docker images are available for easy deployment of Hyperledger Fabric v1.0. Docker images will be available for all major components to run a network (peers, orderer, Kafka, ZooKeeper, CouchDB). A “Getting Started” section is available in the documentation. The end-to-end flow will help anyone easily start the network, run a simple application, and learn the basics of running Fabric v1.0.

The following test scenarios were executed:

Chaincode interfaces were exercised to ensure that transactions work properly. There are two interfaces–init and invoke–which the chaincode developer must code. The remaining interfaces are implemented in the Fabric and are considered chaincode APIs.

The following ledger tests were run:

Transactions invoked on ledger were tested for data accuracy on state database using chaincode_example02 in scalability tests mentioned below.

The ability to add a peer was also verified. This was done by starting with three peers, running several transactions, and then adding a peer in a different organization (already defined within the genesis block) and ensuring it could synchronize its ledger with the running peers.

Negative flows were executed to confirm that we see rejections when we expect them.

The v1.0 architecture is designed for concurrency by eliminating serialization and allowing transactions to run in parallel. The concurrency testing will continue to evolve and below describes the current testing: 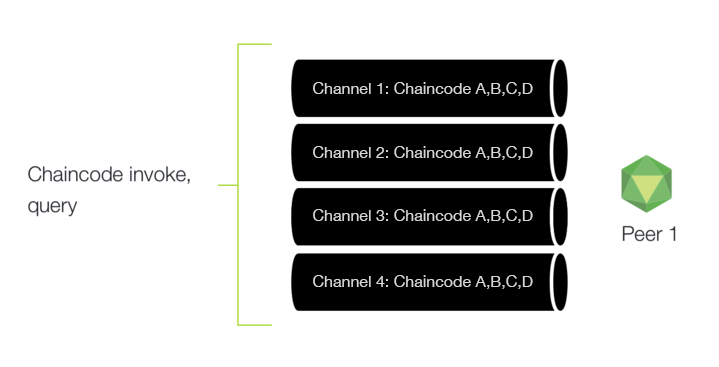 Except where otherwise noted, content on this wiki is licensed under the following license: Hyperledger wiki License